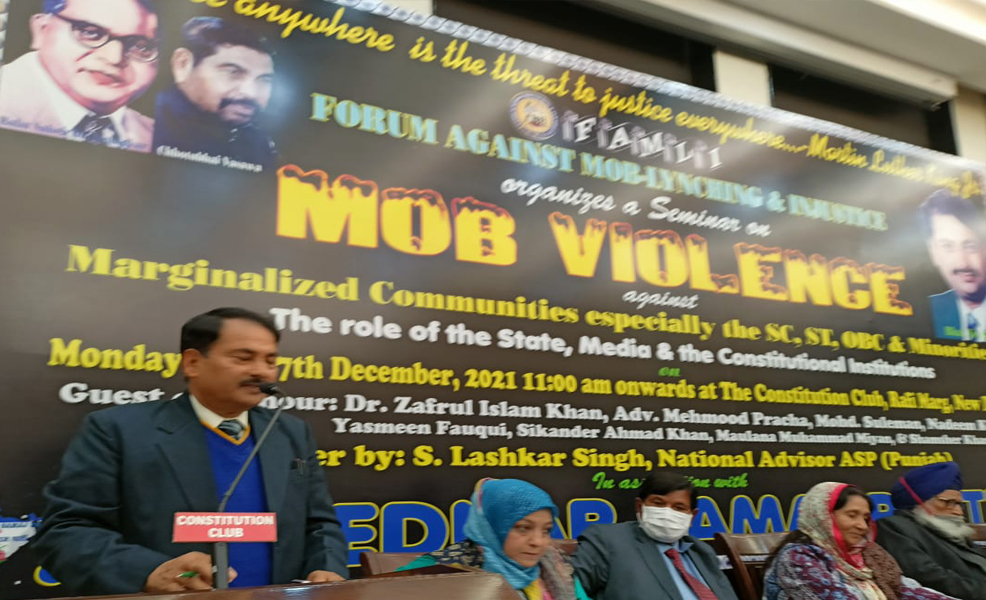 Today a national seminar on the incessant killing of the innocent of the marginalized communities especially the Dalits (SC, ST, OBC) n Muslims that too in broad day light by the mob of the Caste- Hindu fanatic goons were held today i.e 27th December, 2021 at the Speaker Hall, Constitution Club, New Delhi.

Speaking on the occasion, the National President of Ambedkar Samaj Party Bhai Tej Singh has expressed concern that the marginalized communities in this country of ours has always been treated shabbily by the Caste Hindus and the governments thereof. The Dalits, the erstwhile Shudra were kicked and killed at will with no faults of theirs. Their women folks were not only divested of their modesty but rapped and murdered. It all happened as a matter of right of the Caste Hindus who were duly empowered by the Hindu Personal Law i.e. “MANUSMRATI” and other Hindu religious Texts as well. He took a surprise note of the Manusmrati Verses 6 & 9 under Chapter 10 that a Brahman male can have sexual intercourse with any woman in the universe!

After the so-called independence of this country of ours the Muslims who largely constitute from among these erstwhile Shdras have become the soft target of the same lot of the Caste-Hindus. If the major incidents of the killing of the Muslims is taken note of 1948 Hyderabad Massacre, 1964 Kolkata riots, 1969 to 1989 & 2002 Gujarat riots, 1970 Bhiwandi riots, 1980 Moradabad

Ever since the advent of the RSS backed BJP Governments at Centre, the modus operandi of the killing of dalits n Muslims has drastically been changed when the marginalized communities have refused to be the part of the heinous killing against the minorities during riots. They officially resorted to take to task the Muslims on the pretext of ‘Terrorism’ and unofficially on the pretext of “MOB-LYNCHING”! He said our Constitution does not empower anybody to take the lives of others but because of it being in the wrong hands i.e. in the hands of the enemies of humanity it all continues to happen frequently and at will too. There were spate of incidents of Mob-lynching in all over the country beginning with the 18 June 2019 at Dhatkidih village of Jharkhand’s Seraikela Kharsawan district, a 22-year-old Tabrez Ansari, was lynched where in the video of the attack, he was pleading to the mob and was forced to chant “Jai Shree Ram” and “Jai Hanuman”, 15 June 2020, at Mangalore, in Karnataka, a tempo driver Mohd Hanif was brutally beaten up by the cow vigilante lynch mob and damaged the tempo vehicle.

The list of the killing of dalits in Mob-Lynching is not very short. The innumerable incidents  of

Mob-lynching of dalits including 15th Oct. 2002 Dulina where five dalits were brutely killed on the pretext of skinning dead cow, 11th July seven dalits were flogged by the Mob of the Caste Hindus on the same pretext…Hundreds of incidents of violence against Christians are reported by various organizations every year. India’s internal security and its National Commission for Minorities (NCM) officially list more than a hundred religiously motivated attacks against Christians each year The Kandhamal violence attack of 2007-08, 1998 attacks on Christians in southeastern Gujarat, Karnataka. Anti-Christian violence increased dramatically since the Bharatiya Janata Party (BJP) started its rule at the center in March 1998. The Vishva Hindu Parishad (VHP), Bajrang Dal, and Rashtriya Swayamsevak Sangh (RSS) are the most accused organizations for these violences.

Bhai Tej Singh has taken to task the Hindus especially the Caste-Hindus for engineering the heinous crimes of mob lynching against dalits, Tribals, Muslims and Christians. These mob lynching are being committed mostly by the rabid Hindu organizations under RSS and patronized by Hindu Government of BJP. Ever since the advent of Narendra Modi to power, the crimes of mob lynching have taken enormous prepositions. The National Crime Report Bureau (NCRB) DATA spells out the gigantic figures of 6986 crimes in 2016 and 9013 in 2017. There appears a clearcut nexus between the government, Caste-Hindu goons, the Police and judiciary as well to terrorize people. On occassions, it has been noticed that a few Caste-Hindu goons compels the non-Hindus especially dalits n Muslims to chant “JAY ShriRam” failing which they resort to mob lynching.

Bhai Tej Singh has said that almost everybody is aware of the nexus between Government and media which is dominantly owned by the Caste Hindus but surprised at the harrowing silence of the Constitutional institutions viz. the Commissions for the Scheduled Caste, the Scheduled Tribes, the Backward Castes, the Minority..and above all the Human Right Commission. He said that we are aware of the role of the three major institutions of governance that is the Legislature, the Executive and the Judiciary which too dominated by the Caste-Hindus and the stooges thereof.

As a matter of solutions of all the problems and persecutions of the marginalized communities especially dalits n Muslims, Bhai Tej Singh has given a clarion call to stop voting for the Caste-Hindus i.e. the Brahmins, Kshatriyas and Vaishyas to wipe them away from the corridors of governance and get rid of the rabid Hindu organization led by RSS (Racial Satanic System).